To make sure non-electronic devices will perform as they’re supposed to in their intended applications, they must go through testing. Across all areas of manufacturing, testing is an essential means of ensuring products meet relevant standards. Mechanical testing is an important type of testing that is often a significant means by which manufacturers ensure the quality of non-electronic devices.

In this article, we’ll look at what non-electronic devices are, what mechanical testing is, why exactly it’s performed, how these tests work and whether it makes more sense to conduct these tests in-house or outsource them.

What Is a Non-Electronic Device?

A non-electronic device either doesn’t rely on electricity at all or is electrical but not electronic.

Though the terms “electrical” and “electronic” are often conflated, even sometimes among engineers, there is an important distinction, which is worth noting here:

We can also make a distinction between electrical and electronic devices based on the strength of the electrical current involved. Electrical devices generally use a heavy current whereas electronics use a light current.

As technological innovation continues, many devices that were previously just electrical devices are now being turned into electronic devices that can store or compute information, communicate in some way or perform another complex task. For instance, car engines are often built with computers integrated into the design that can run offer diagnostic information to both drivers and mechanics. However, non-electronic devices still have an important place in the world.

Many other everyday objects, including tools, cookware, furniture and more, don’t include any electrical or electronic components at all. These non-electronic devices need to be strong and reliable.

What Is Mechanical Testing?

Non-electronic components and raw materials may not need to undergo the same testing as electronic devices, but that doesn’t mean they don’t need to be tested. Depending on the material and its end application, there are a variety of tests that may provide relevant insight into a product’s makeup and performance, such as hydraulics testing, environmental testing, chemical testing and many other testing categories. This insight is necessary for determining the safety and durability of a product.

One important type of testing used on non-electronic devices is mechanical testing. Mechanical testing involves exerting high levels of some kind of force on an object and then measuring the object’s response. Examples of this physical force include shock stresses, vibration and strain.

Standard-setting organizations have specified how to carry out various types of mechanical testing to achieve consistent, accurate results. These organizations also determine many of the standards that serve as benchmarks for characteristics measured in these tests. This standardization ensures consistency across various products and manufacturers. 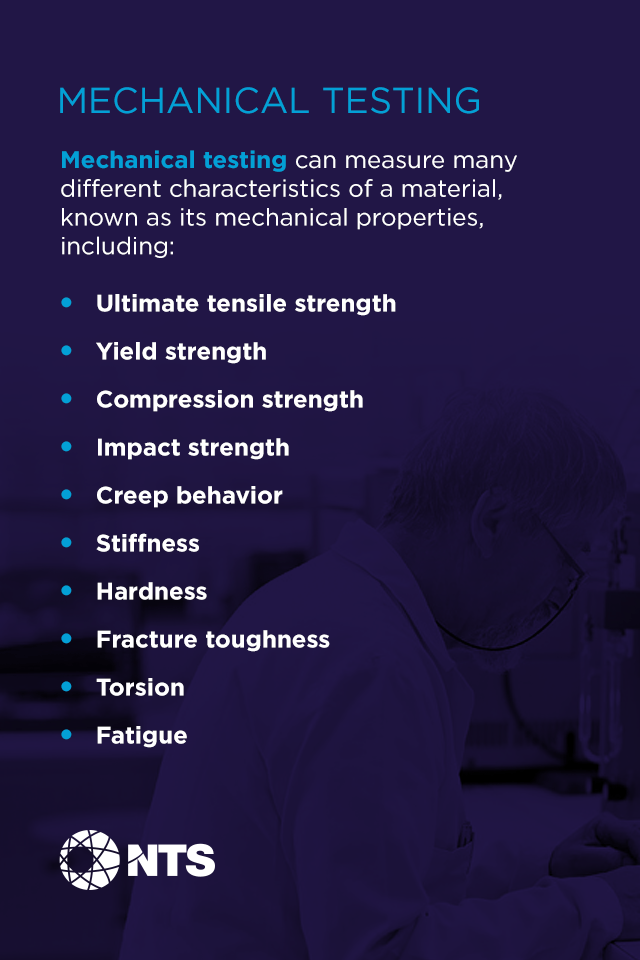 Mechanical testing can measure many different characteristics of a material, known as its mechanical properties, including:

Both the mechanical properties listed above and other characteristics of materials are determined through testing, which we’ll discuss more in the next sections.

Why Is Mechanical Testing Performed?

Mechanical properties of materials, such as tensile strength or hardness, can impact a product’s overall quality and performance, so any manufacturer with a commitment to quality control should do all necessary testing to ensure their products are up to par.

Mechanical testing, though it’s done in a controlled way in a lab, determines whether a product can withstand the type of stress it may be under out in the real world. These tests follow standardized methods so that the results are accurate and can be reliably compared with the results for other products and materials.

Putting non-electronic devices through mechanical properties testing is necessary for making sure your products meet standards laid out by national or international standard-setting bodies. Most of these relevant standards come from ASTM and ISO. ASTM originally stood for The American Society for Testing Materials, but ASTM is now an international organization. The International Organization for Standardization (ISO) is another standard-setting body whose standards are widely recognized.

Whether from ASTM or ISO, these standards create a baseline that gives consumers confidence when purchasing products. They should know they’re getting a quality product that meets basic standards for safety and function. Without adhering to these standards, manufacturers may be endangering their consumers and opening themselves up to legal ramifications should a product fail catastrophically.

Beyond these baseline standards, some manufacturers may have higher standards that govern their products, either specified by their own company or by an industry-specific standard-setting body. Manufacturers should understand their product’s intended use, environment and the possible types of stress it may be under and should consider what sorts of standards their materials would need to meet to perform well in this context.

For example, the U.S. Military has its own specifications and standards to ensure that military-grade products can stand up to various types of wear and will function reliably. Manufacturers who produce products intended for military use may pay attention to these standards. Another example is the automotive industry, where standards from the Society of Automotive Engineers (SAE) may govern their benchmarks for quality.

How Are Non-Electronic Devices Tested?

Mechanical characteristics of a material or device are determined through various mechanical tests. These tests simulate types of wear or stress a product might experience to establish practical aspects of the product’s profile. Let’s take a moment to look at five main methods of mechanical testing:

Tensile testing can be carried out in several different ways, including:

Since tensile stress is an outward force pulling on an object in opposite directions, in every case, tensile testing is aimed at creating this outward force in a controlled way.

Compression testing can determine characteristics like compression strength, elastic limit, proportional limit, yield point and yield strength. To perform the test, an engineer places the object between two plates. These plates then move in toward each other, compressing the object in the middle. This pressure is applied for what may be a pre-determined length of time, or until the subject of the test is destroyed or irreparably deformed. Eventually, the engineer would move these plates back apart and see whether the object returns to its original shape or remains permanently deformed. A couple of examples of compression tests include:

Hardness can be tested in various ways:

Fracture mechanics can reveal how severe a crack or other type of flaw is and can determine at what point the flaw becomes an issue. This may involve testing an intentionally cracked material or product, or one that has cracked throughout other testing. Some types of fracture testing include:

Each of these tests works a bit differently to provide unique information about a material’s ability to withstand cracking and for small flaws to resist growing into more serious cracks.

Fatigue involves cyclical loading to see how an object responds over time. Fatigue testing can occur at the earliest stages of the manufacturing process, on raw materials, all the way to the final stages, when a device is in its finished state. Not all types of force are the same, so there are many types of fatigue tests to demonstrate an object’s ability to resist various types of stress. Some different types of fatigue testing include:

Mechanical testing can happen in-house in a manufacturing facility, or it can be outsourced to testing companies. Especially as the standards for products’ quality and safety increase, many manufacturers are struggling to dedicate the time and funds necessary to conducting tests in-house. After all, each test requires certain mechanical properties testing equipment along with a testing engineer who has the expertise to carry out the test correctly and produce an accurate result.

Testing the mechanical properties of non-electronic devices is an exact science. Depending on the specific standards a product should meet, it will need to undergo certain tests that should be conducted in an exact, methodologically-sound way. Companies that offer testing services are typically better equipped to perform all the necessary testing for your products. After all, this is what they’re experts in — it’s what they do.

NTS provides testing services for companies and government organizations all over the world. Our more than 50 years of experience and advanced expertise makes us a reliable partner for any type of testing, including mechanical testing of non-electronic devices.

If you want to learn more about how NTS can help your company achieve quality standards, call us at (844) 332-1885 or contact us online. We are happy to offer you a free quote if you’re interested in our testing services or any our other valuable services.