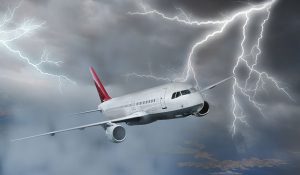 Early aircraft designs typically consisted of a series of cables, chains, cranks and various other mechanisms to operate the systems which made the aircraft fly.  Although these systems were considered “state of the art” at the time, they were plagued with inaccuracy and reliability issues.  Due to increasing advancements in the field of electronics over the last 60 years, mechanical flight control devices are being replaced or augmented with electronic circuitry for enhanced accuracy, reliability and, most of all, human safety.  However, these changes give rise to myriad new concerns related to electromagnetic interference (EMI) of critical on-board electronic systems.

These concerns are based on the phenomena where electronic circuitry fails to operate as intended (i.e. becomes susceptible) when exposed to high levels of electromagnetic radiation. Therefore, the need for EMI testing has never been more important for all commercial and military aircraft in use today. High Intensity Radiated Field testing, commonly referred to as HIRF testing, is designed to verify and ensure safety during flight and landing of new and/or modified aircraft. In accordance with SAE ARP5583 Guide to Certification of Aircraft in a High-Intensity Radiated Field (HIRF) Environment can be conducted using high-level or low-level test methods.

High Level Tests are performed using peak and average field levels determined for one of three particular HIRF environments over a test frequency range up to 18 GHz. This process uses a direct drive method up to the first airframe electrical resonance, and a radiated field test methods above the first airframe resonance. High level tests are used to verify the aircraft’s “safety of flight” controls maintain critical functionality while exposed to the simulated HIRF environment. This requires several factors to be considered prior to testing such as the need for specialized high power test equipment, aircraft system instrumentation and flight emulation, RF hazards regarding fuel ignition and personnel exposure and adherence to national RF transmission rules and regulations. Often times the aircraft size prohibits the use of conventional anechoic lined EMI test chambers and special permits are required for performing the testing process outdoors. However, this will usually be accompanied with limitations on power levels and/or frequency selection.

Alternatively, Low Level Tests can be used to determine the transfer function between the external RF environment to the aircraft’s internal wire bundles or fuselage. This approach is preferred over high level testing for its reduced RF exposure levels and RF hazard considerations.  However, the Low level test requires a complex analytical modeling approach to ensure compliance. Generally, 2-D and 3-D computational models of the airframe up to the first electrical resonance are required. Models are required to estimate the level of influence ground plane coupling will have on low level swept current test results, especially where it is impractical to elevate the aircraft safely due to its size.

The NTS system innovation team has developed and implemented automated test profiles using Totally Integrated Laboratory Environment software (TILE), and computational modeling profiles utilizing Microwave Studios software through Computer Simulation Technologies (CST). NTS is fully equipped to achieve the most severe HIRF Environments specified in SAE ARP 5583, accompanied by a staff that is highly experienced with complex in situ testing programs.  Additionally, NTS/Lightning Technologies Inc. (LTI) is one of the world’s leading experts on direct effects lightning on aircraft, and has performed lightning qualifications on virtually every aircraft type in flight today. NTS is the only organization in the world to offer aircraft-level testing for both HIRF and Lightning. Please contact us for more details at nts.com