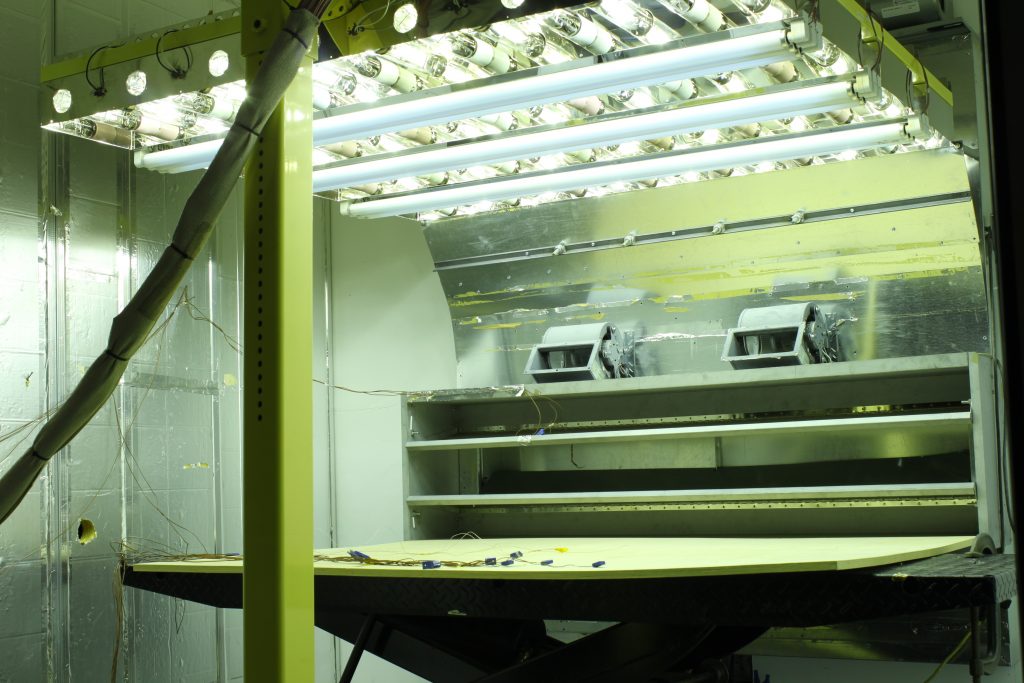 Solar radiation (sunshine) testing is one of the basic tests required for any military equipment planned to be deployed in the open and therefore subject to direct radiation from the solar source. The effects of this radiant energy can generally be divided into two groups or classes, heat effects and photochemical effects. Heat effects on exposed equipment can raise the internal temperatures of the equipment substantially above the ambient air temperature. Temperatures in excess of 160oF have been recorded in parked aircraft exposed to the sun while ambient air temperature was in the 90oF range. Photochemical effects of sunlight may hasten the fading of colors and lead to the deterioration of plastics, paints, rubber and fabrics. The combined effects may lead to the outgassing of plasticizers in some materials along with discoloration and a reduction in transparency.

MIL-STD-810, Method 505.5 outlines two procedures for performing the Solar Radiation test. Procedure I requires a cyclic exposure based on the diurnal cycle and is most useful for determining heating effects on exposed materiel as well as materiel enclosed within a container. Procedure II is a steady state (non-cyclic) exposure most useful for evaluating actinic (photochemical) effects of ultraviolet radiation on materiel since it represents an accelerated test with a factor of 2.5. Because Procedure I is more akin to a natural cycle and does not have the acceleration factor of Procedure II, it is not an efficient cycle with which to evaluate long term exposures. Therefore, when it is used mainly to evaluate the direct heating effect, Procedure I can be performed with source lamp arrays emitting less than the full solar spectrum. Procedure II however, demands full spectrum sources emitting light in the ultraviolet range if the total effects of long term exposure are to be properly evaluated.

The solar light spectrum has been accurately measured over the wavelength range of 280 – 3000 nm as well as the power distribution within this range, and it is this range that we would seek to reproduce in the Solar Radiation test.  Reproducing this entire range using lamp sources however can be quite challenging. Sources emitting ultraviolet wavelengths between 280 and 400 nm tend to be quite costly and their performance deteriorates quickly. Some of the MIL-STD recommended sources such as xenon arc and carbon arc fall into this category.  In fact, it was reported that the first commissioned sunshine test facility in 1945 fell short of the contract requirements due to several deficiencies, one of which was the amount of UV that could be produced at the test item. Cost and reliability issues are why many test labs have chosen to perform only Procedure I  with source lamps covering the visible and infrared spectrum range of 400 – 3000 nm (0.4 – 3.0 µm).

Reproduction of the required environment for the Solar Radiation test requires a chamber space in which the ambient air temperature and airflow over the test item can be controlled as well as a solar light source which may consist of a single source in the case of arc-type lamps or a multiple source array in the case of metal halide or incandescent type lamps. The distance of the light source from the test item may be varied to achieve the required irradiance. Airflow over the test item can significantly impact test results. When MIL-STD-810D introduced the “cycling for heat effects” (Procedure I) the guidance for airflow was to use airflow as low as possible consistent with achieving satisfactory control of the ambient air temperature at the test item or between 0.25 and 1.5 m/s (50 to 300 ft/min). The current guidance from MIL-STD-810G has changed for procedure I to 1.5 to 3.0 m/s (300 to 600 ft/min) in recognition of better field data. The requirement for peak radiation intensity at 1120 W/m2 has changed little over the history of the Solar Radiation test although there have been slight changes to the spectral energy distribution based on updated measurement techniques of the actual solar source.

When the primary concern is testing for heat effects, the question is often asked why an oven or chamber test for enclosed equipment could not be used in place of the Solar Radiation test.  The primary reason is that ovens and chambers transfer heat from a uniform ambient atmosphere surrounding the test item, whereas the solar test transfers heat through direct radiation. The directional effect of radiant heating produces temperature gradients through the test item that are not replicated in ovens or temperature chambers.

When a Solar Radiation test is required,