Emissions Testing for Information Technology Equipment – EN 55022:2006 and Requirements for Measurements above 1GHz

In November 2008 the European Union’s Official Journal (OJ) published lists of standards for the Electromagnetic Compatibility (EMC) Directive and Radio and Telecommunications Terminal Equipment Directive (R&TTED). Both lists include references to EN 55022:2006 and its amendment A1, released in 2007.

EN 55022:2006 will supersede EN 55022;1998 and become the requirement for Information Technology Equipment (ITE) sold into the European Union after October 1st 2009 , with the requirements of Amendment A1:2007 coming into force one year later on October 1st 2010. What are the differences between the 1998 and 2006 versions of the standard and what new requirements will be introduced by A1:2007?

Let’s begin by reviewing the history of CISPR 22 from 1997 onwards. International Standard CISPR 22 is the basis for not only EN 55022 but also for many of the other national versions of standards for ITE.

Amendment A1 to CISPR 22:1997 was issued in 2000 and adopted into EN 55022 in the same year. This amendment added the use of ferrite clamps on all cables that leave the test site (i.e. those cables connecting to remote support equipment) when measuring the radiated emissions from table-top equipment. The purpose was to improve the repeatability of measurements between test sites by reducing the effects of the remote support equipment and long cable lengths.

In 2005, CISPR 22 Edition 5 was released. The major change in this version was to remove the requirement for the ferrite clamps to be used on cables exiting the test site. EN 55022:2006 is based on this standard.

The big change came with amendment A1, issued by CISPR in 2005 with the EN 55022 version released in 2007. A1 added requirements for testing above 1GHz.

For those familiar with testing for the North American market on the surface it would appear that many of the requirements match those of the FCC. The most significant difference comes in the test site to be used.

The FCC rules require the use of a test site that meets the requirements for making measurements below 1GHz as detailed in ANSI C63.4:2003 (i.e a test site with a ground plane). CISPR 22 (and, therefore, EN 55022) references a test site described in CISPR 16-1-4. The CISPR 16-1-4 test site for testing above 1 GHz is designed to simulate a free-space environment, so the ground plane needs to be covered with rf-absorbing material to suppress any reflections. In addition the specifications require a very low reflection from around the EUT. This means that a test site used for FCC measurements above 1 GHz and CISPR measurements below 1GHz cannot be used without modifications when making CISPR 22 measurements above 1GHz. Further, the specifications for the test site as detailed in CISPR 16-1-4 may require significant changes to an existing test site prior to be considered suitable for such measurements.

As to the limits in CISPR 22, the following is a comparison between the limits for digital devices required by FCC Part 15 and the latest CISPR 22/EN 55022 limits.

You will note that the CISPR 22/EN 55022 limits are 4dB lower than the FCC limits for measurements below 3GHz and identical above 3GHz. You might expect that measurements made using the CISPR method should be lower than those made using the FCC/ANSI method because there should be no reflected signal from the ground plane to add to the signal transmitted directly between the product under test and the measurement antenna. However, our experience has been that there is very little difference between the results obtained with the two methods.

As with FCC rules, the upper frequency of the measurement range for the CISPR 22/EN 55022 measurements is a function of the highest frequency generated within the product, as summarized below. 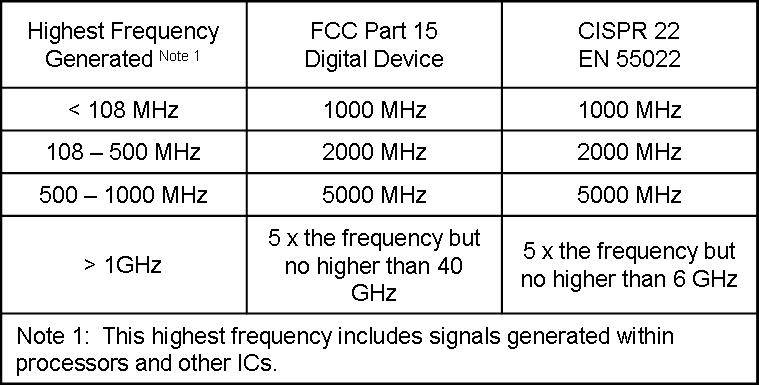 Many products will have been tested against the requirements of EN 55022:1998 (with or without amendments A1 and A2) or EN 55022:2006 without its amendment. As the significant difference between EN 55022:1998 (without amendments) and EN 55022:2006 are in the specifications for the ISNs, it is likely that results from tests conducted per the older versions can continue to be used to help support your Declaration of Conformity to the EMC or R&TTE Directives when the transition period to EN 55022:2006 ends in October 2009 and its amendment 1 in October 2010. To see what tests may need to be repeated we need to look at each of the different tests in turn – AC power port conducted emissions, telecommunications ports conducted emissions, radiated emissions below 1GHz and radiated emissions above 1GHz.

The changes to EN 55022 over the last 9 years have seen some new measurement methods introduced and, in some cases, removed again. Changes in test equipment requirements have also created issues with how to determine if measurements made to one version of the standard can still be used to demonstrate compliance with another.

Hopefully this article clarifies what has changed and what steps you need to take to ensure continued compliance of your ITE products with the European Directives beyond the October 2009 and October 2010 implementation dates.

2. Elliott’s 5 and 10m chambers have been updated to meet the requirements.