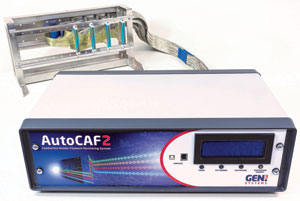 Conductive Anodic Filament (CAF) testing helps to determine the reliability of a printed circuit board (PCB) laminate material or a finished product. With conductor spacing and overall part sizes getting smaller and smaller, the necessity for this test is increasing.

CAF testing is performed under high temperature and high humidity environmental conditions, 65 or 85°C with 87% Relative Humidity (RH). The standard test method used is IPC-TM-650, Method 2.6.25A, utilizing standard coupon designs such as IPC-9253, IPC-9254, IPC-9255, and IPC 9256. Several original equipment manufacturers (OEMs) have adopted their own coupon design in place of the standard coupon design. The coupon designs should include different hole sizes; hole-to-hole, hole-to-plane, or Z-axis spacings; and glass fiber orientations to allow for all possible failure modes to determine if a laminate material will meet the necessary requirements.

For the IPC test method, the samples are placed under environmental testing for 596 hours, with a bias voltage being applied for the duration of the test. Periodic high resistance measurements are performed with the samples still under conditions. The data is reviewed for any large drops or high resistance shorting (≤1.00 x 107Ω). When CAF growth is suspected, we can perform a standard failure analysis within the failed area.

Conductive Anodic Filament (CAF) Formation is defined, in IPC-TM-650, Method 2.6.25A, as the growth of metallic conductive salt filaments by means of an electrochemical migration process involving the transport of conductive chemistries across a nonmetallic substrate under the influence of an applied electric field, thus producing Conductive Anodic Filaments. In the picture above, you see broken CAF growth between plated through holes (PTHs), which had previously caused shorting within a printed circuit assembly. IPC-9691A: User Guide for the IPC-TM-650, Method 2.6.25, Conductive Anodic Filament (CAF) Resistance Test (Electrochemical Migration Testing) contains much more information and background on the testing itself.

CAF testing is often used as a standalone test, for IPC-4101 qualifications, or as part of OEM specifications.