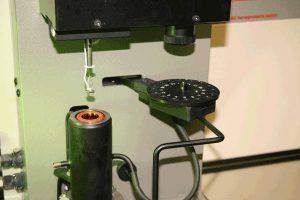 Thermo Gravimetric Analysis (TGA) is a thermal analysis technique used to measure changes in the weight (mass) of a sample as a function of temperature and/or time. TGA is commonly used to determine polymer degradation temperatures, residual solvent levels, absorbed moisture content, and the amount of inorganic (noncombustible) filler in polymer or composite material compositions.

A simplified explanation of a TGA sample evaluation may be described as follows. A sample is placed into a tarred TGA sample pan which is attached to a sensitive microbalance assembly. The sample holder portion of the TGA balance assembly is subsequently placed into a high temperature furnace. The balance assembly measures the initial sample weight at room temperature and then continuously monitors changes in sample weight (losses or gains) as heat is applied to the sample. TGA tests may be run in a heating mode at some controlled heating rate, or isothermally. Typical weight loss profiles are analyzed for the amount or percent of weight loss at any given temperature, the amount or percent of non-combusted residue at some final temperature, and the temperatures of various sample degradation processes.

TGA is a useful technique for assessing the effectiveness of oven drying solution polymerized polymer samples. The volatilization of residual solvent is typically associated with the initial weight loss process in a TGA heating run. In some cases, absorbed moisture may be liberated over this same temperature range, though. After the initial solvent (or moisture) weight loss process, TGA profiles will typically plateau to some constant weight level until the polymer degradation temperature range is reached. The weight fraction of residual solvent (or moisture) and the onset and maximum rate weight loss degradation temperatures are readily determined by TGA.

The glass fiber content of composite samples is also readily analyzed by TGA. The polymer resin is degraded and burned off in heating these types of composite specimens to high temperatures in an air atmosphere. The noncombustible glass fiber is left behind as a residue. The weight fraction of glass fiber in the composite is determined using the TGA residue analysis routine.