Until recently, quantitative gun barrel inspection had to be conducted manually by hand using a star gauge or air gauge, a process that would take hours and provide minimal data. Electronic star gauges were eventually developed as was the video borescope, but these systems were still limited to providing a minimal number of data points. In stark contrast, the BEMIS™ captures over 7,000 data points per revolution and performs the inspections in mere minutes. It also removes much of the user-error and subjectivity that exists in the legacy methods. NTS provides non-destructive laser-based mapping of gun bores, utilizing industry-leading BEMIS™ (Barrel Erosion and Measurement Inspection System) technology. Located in Belcamp, MD, just minutes from the U.S. Army Aberdeen Proving Ground, this laboratory is the industry’s first commercial service lab for gun barrel inspection.

NTS’ Barrel Erosion and Measurement Inspection System, or BEMIS™, designed and manufactured by Laser Techniques Company, in Redmond, Washington, uses an advanced laser profilometer that has been miniaturized to fit inside a delivery package as small as a .22 caliber bullet. Using this unique sensor design, we are now able to digitally capture thousands of points per second inside of a firearm barrel in order to capture high-precision measurements and assess the quality, like never before. This system can inspect a standard length rifle barrel in minutes, with a very simple and intuitive setup and calibration. Collecting this type data previously would have taken a lot longer and introduced unwanted variability into the process. 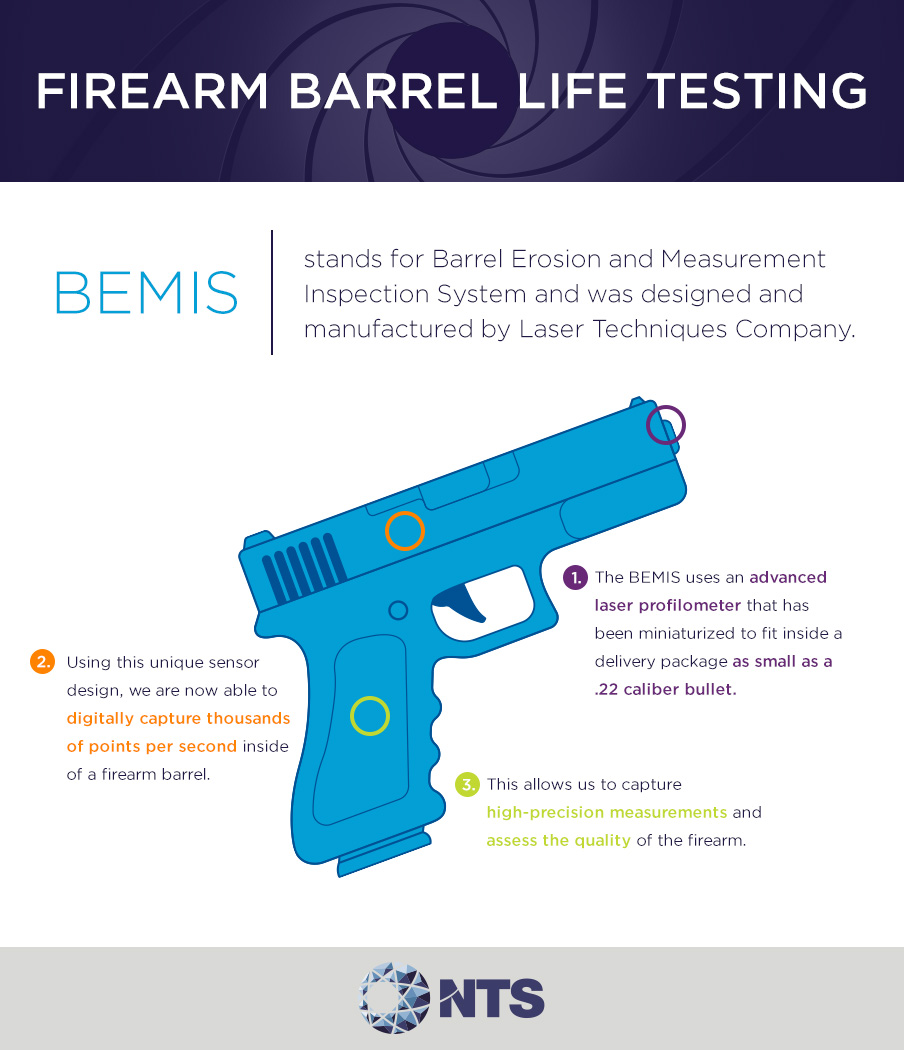 While the method of laser profilometry has been around for decades, more recent advances in optical design and fabrication have made it possible to construct sensors optimized for scanning rifled barrels. Laser Techniques Company began this work in 2000, after being contacted by David Le, an engineer at the US Army Yuma Proving Ground in New Mexico, to fill a technology gap that existed for simple, accurate, and repeatable inspection of .50 caliber M2 machine gun tubes1. Over the next decade and a half, Laser Techniques has gone on to develop several generations and further refine this technology, to include individual sensors for just about every common caliber ranging from .22 caliber small arms, all the way up to 155-mm heavy artillery cannons.

As a ballistic testing laboratory primarily focused on testing and evaluation of body armor, NTS Chesapeake Testing hundreds of shots per day, from an inventory of over 300 test barrels, ranging from .22 caliber to 30-mm. Understanding and controlling variability in the testing process is key to ensuring accurate results that our customers can trust. It is this drive to reduce variability that led NTS Chesapeake to obtain the BEMIS™ systems and set up an in-house barrel inspection process to understand and quantify barrel condition. Because of the vast spread of ammunition types, and range of velocities used in armor testing, our test barrels cannot be evaluated by simply counting shots. This has not proven to be a sufficient method for estimating the lifetime of a barrel, and leads to the surprise of “dead” barrels (meaning barrels that no longer produce a predictable velocity or accurate shot placement) being discovered on a test, which can be a costly interruption.
All test barrels received by NTS Chesapeake are baseline inspected upon arrival and re-inspected periodically by shot count. New barrels are checked and verified to ensure that they are the proper size and twist rate for projectiles they will fire, and the test specification they must meet. Because all data including projectile type/weight and velocity are recorded for every single shot, any changes detected in the barrel geometry over time can be analyzed along with these variables. Limited studies have already revealed interesting results, and as shot counts increase and more data is collected, this opens the door for development and implementation of a more analytical approach to estimating barrel life.

The examples shown below are from analysis of 9-mm test barrels designed for testing body armor. The barrel on the left is brand new, not yet fired, and the barrel on the right, is one that has approximately 5,600 shots. Historically these barrels last over 5,000 shots before being taken out of service, but a more numerical approach will make this number easier to predict, based on the types of projectiles and the velocities at which they are fired.

Applications Of This Technology Include:

The examples shown below are from analysis of 9-mm test barrels designed for testing body armor. The barrel on the left is brand new, not yet fired, and the barrel on the right, is one that has approximately 5,600 shots. Historically these barrels last over 5,000 shots before being taken out of service, but a more numerical approach will make this number easier to predict, based on the types of projectiles and the velocities at which they are fired.