Self-Destructing Devices: The Future of Electronics? 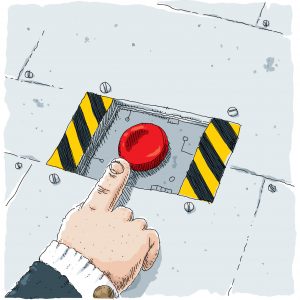 It’s a common trope used in many spy movies and books: The hero gets his mission briefing on a tape recorder that ends with “This message will self-destruct in five seconds”. Then our super spy hero somehow gets rid of the tape recorder before it explodes in an extraordinary way. Though the explosion is probably just a bit of Hollywood drama, the technology for a self-destructing device might not be that far off.

Researchers at the University of Illinois, led by aerospace engineering professor Scott R. White, have developed self-destructing electronic devices. The devices were developed as a way of reducing electronic waste, with the idea that devices that are no longer needed would be triggered by some stimulus which will begin the device’s destruction. The researchers also propose that the materials in the devices could be recovered after destruction, and be recycled.

The White group has long been working on device sustainability, and has developed methods of self-healing, to extend device life. However, with this project the group’s goals reversed completely. The White group teamed up with John A. Rogers, a Swanlund chair in materials science and engineering and director of the Frederick Seitz Materials Laboratory at Illinois, to work on the new idea of device destruction. Speaking about their new research goal, White said “If you can’t keep using something, whether it’s obsolete or just doesn’t work anymore, we’d like to be able to bring it back to the building blocks of the material so you can recycle them when you’re done, or if you can’t recycle it, have it dissolve away and not sit around in landfills.”

The research group developed both heat triggered and radio wave triggered destructing devices. The group is also working with other triggers, including ultraviolet light, electromagnetic waves, and mechanical stress. The basis of the self-destruction is a wax coating in which microscopic droplets of a weak acid have been trapped. The electronics are then coated in the wax. When the devices are heated, the wax melts, releasing the acid, which then acts on the magnesium circuits and flexible materials that have been used for the research tests. The radio wave triggered destruction is controlled by an embedded heating coil with a radio frequency receiver that causes the wax to melt upon receiving its signal, which releases the acid.

With this technique, of wax embedded with weak acid, the group has shown a high degree of control over the reactions. The group has been able to control the speed of device destruction by altering the melting point of the wax used, the thickness of the wax and the concentration of the acid. The group has had success with devices that self-district anywhere from 20 seconds to a couple of minutes after the heat is applied, or the signal is sent. The group also hypothesizes that by mixing different wax and acid combinations in a single device, it could be possible to develop devices that could be destroyed in stages, giving precise control over which parts of the device are operating at any given time. This could lead to the development of very advanced electronics that would be able to sense some external stimuli and respond to that change, through a physical change to the circuitry of the device.

Device self-destruction and the processes developed by the White group could lead to a decrease in electronic wastes in landfills, a decrease in rare material use by the electronics industry, and the potential for more advances electronics. These techniques could also be used to keep James Bond, and his fellow spies, a little safer after listening to their mission briefing. However, the lack of an explosion probably means that we won’t be seeing this technique in many big-budget Hollywood movies.